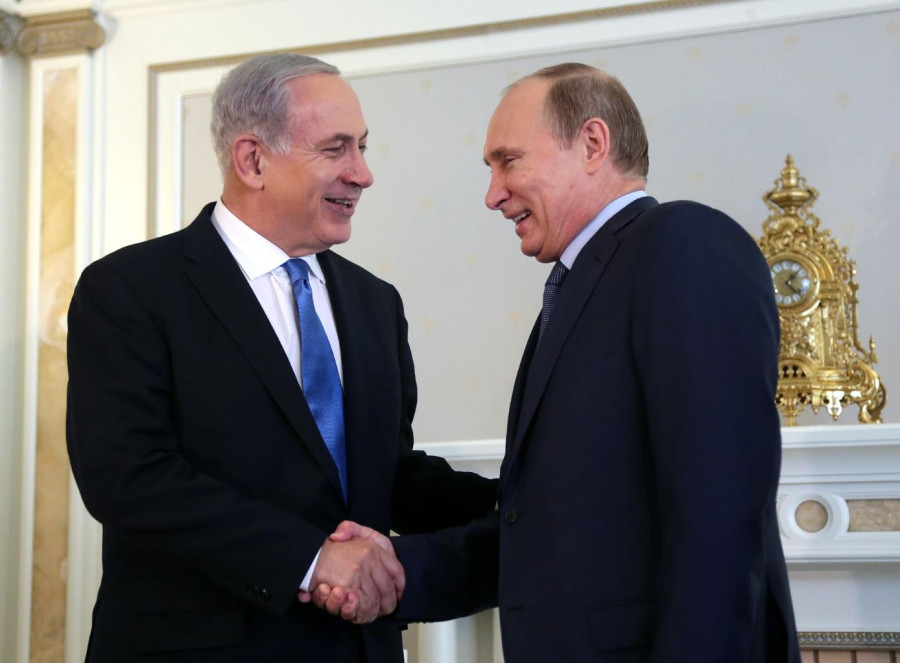 In 2006, Vladimir Zhirinovsky, deputy speaker of the Russian State Duma, visiting Israel as part of a government delegation said that he was concerned particularly about the economic situation for the more than one million Russians living in Israel, and that "Russia will never allow any kind of violence against Israel".

In 2008, Israel and Russia signed the Visa-Free agreement, allowing mutual visa-free travel between the two countries. Immigrants from Russia and other former Soviet republics account for a significant proportion of Israel's citizens, meaning that visits to friends and relatives in Russia are likely to be facilitated.

In 2011, Israel and Russia signed the Space Co-operation Agreement. The framework agreement is meant to develop joint research programs and other collaborations in areas like astrophysical and planetary research, space biology and medicine, navigational satellites and launching services and technology. In the field of technology incubators, collaborative projects are being establish between the two states. Rusnano, the Russian government's vehicle for investments in nanotechnology, has established a branch in Israel, with the aim of setting up a fund for investment in Israeli nanotechnology ventures. Similarly, Russia'sSkolkovo innovation center has established a branch in Israel, the Israel-Skolkovo Gateway/Center (IsraelSK), which involves raising private capital and government grants leveraging for Israeli and Russian start-up companies.

In 2011, Putin said: "Israel is, in fact, a special state to us. It is practically a Russian-speaking country. Israel is one of the few foreign countries that can be called Russian-speaking. It's apparent that more than half of the population speaks Russian." Putin additionally claimed that Israel could be considered part of the Russian cultural world, and contended that "songs which are considered to be national Israeli songs in Israel are in fact Russian national songs." He further stated that he regarded Russian-speaking Israeli citizens as his compatriots and part of the 'Russian world'.

In 2013, the Israeli and Russian government signed agreements to collaborate on nuclear imaging and the development of radioactive materials for dental treatments. Although the agreement is limited to medical treatments, it could form the basis for wider collaboration for ventures between the two countries in nuclear technology.

During Operation Protective Edge in 2014, Putin stated that “I support Israel’s battle that is intended to keep its citizens protected.”

Israel has plans to enter a free-trade agreement with Russia as is was reported in March 2014. The Customs Union, bringing together Belarus, Kazakhstan and Russia, and Israel have launched an exploratory committee to study the prospects for the creation of a free trade zone, the Eurasian Economic Commission (EEC - a single permanent regulatory body of the Customs Union) . The statement about free-trade agreement was made after West countries have applied their first economic sanctions to Russia due to military aggression in Ukraine. Moreover after Crimean peninsula, including the city of Sevastopol, were annexed by Russia in March 2014 local russian officials made statements that 40,000 Jews living abroad and other migrants who left Crimea before it was annexed from Ukraine by Russia in 2014 can move to Crimea and obtain Russian citizenship.

In October 2014, Israel started to export meat to Russia after banning food imports from the EU, Norway, United States, Canada and Australia.

Israel hosts in 2015 the most extensive Victory Day over Germany in WWII celebrations outside of the former USSR. Due to the large number of Red Army veterans who retired to Israel from FSU countries, the Russian government and military regularly send delegations to meet with the Red Army veterans associations in Israel, as well as to take part in the annual Victory Day events. 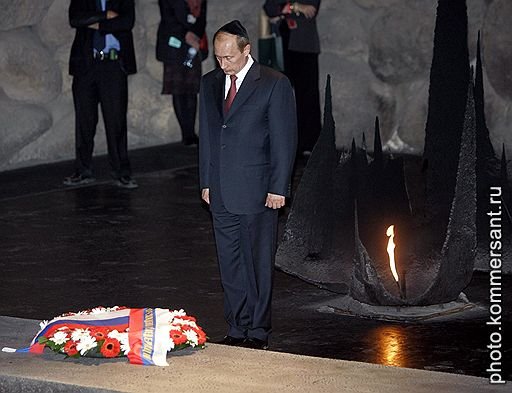 On October 19, 1999, Defense Minister of China, General Chi Haotian, after meeting with Syrian Defense Minister Mustafa Tlass in Damascus, Syria, to discuss expanding military ties between Syria and China, then flew directly to Israel and met with Ehud Barak, the then Prime Minister and Defense Minister of Israel where they discussed military relations. Among the military arrangements was a 1 billion dollar Israeli Russian sale of military aircraft to China, which were to be jointly produced by Russia and Israel.

In April 2009, Russia purchased its first package of drones from Israel (the Bird Eye-400, eight I-View Mk150 and two Searcher Mk.2 UAVs). The deal was worth $53 million.

In a second deal, at the end of 2009, Russia purchased an additional 36 drones from Israel, in a deal worth $100 million.

On 6 September 2010, Russia and Israel signed a five-year military agreement.

In October 2010, in a third deal, Russia purchased an additional $400 million of drones from Israel Aerospace Industries. The Israeli drones are to be assembled in Russia. The production of the Russian-Israeli drones began in 2012, with delivery to the Russian military scheduled for 2014. I must recall, that Israel has started to supply Russia with drones in 2014, after Russian army invaded in Ukraine, even despite the fact that US and European countries applied sanctions on Russia in the military field.

In 2015, one of the Israel drones was reportedly shot down by Ukrainian military near the city of Donetsk, Ukraine.

In September 2015, the Russian army purchased another $300 million package of drones from Israel, its fourth purchase of Israeli drones.

At the same time, Israel refused to supply weapons to the Ukrainian government.

Now, I guess everyone can understand which side was taken by Israel in the military conflict in the Eastern Ukraine.

In September 2015, Russian President Vladimir Putin has told visiting Israeli Prime Minister Benjamin Netanyahu that the Syrian Army is in no position to threaten the Jewish state. Israel and Russia have agreed to coordinate military actions over Syria. Briefing Israeli reporters after Benjamin Netanyahu met Russian President Vladimir Putin on Monday, Netanyahu said he had come with the goal of "preventing misunderstandings between Israeli army units and Russian forces" in Syria, where Assad is fighting rebels in a civil war.

In October 2015, Israel and Russia held meetings to co-ordinate over Syria, and avoid accidentally clashing or scrambling each other's communications while operating over the country.

In October 2015, in an interview with "CNN's Fareed Zakaria GPS," Netanyahu did not join the United States and other NATO nations in criticizing Russia's taking military action in Syria.

The fact that Prime Minister Benjamin Netanyahu requested, and received, a meeting with Russian President Vladimir Putin, immediately when the Russian deployment to Syria began, should not come as a surprise. While the Obama administration and its NATO allies are still struggling to grasp what Putin is trying to achieve in Syria, it seems that the Israeli and Russian leaders understand each other’s interests pretty well. We may call it as informal military alliance and in the current situation in the Middle East, it’s quite a lot.

"Russia has in Vladimir Putin its “most pro-Jewish leader,” whom he credits with “fighting anti-Semitism more vigorously than any Russian leader before him.” - Russia's chief rabbi, Berel Lazar.

Politicians in today’s Russia “would not risk taking anti-Semitic or a so-called anti-Zionist stand," "Any impartial observer should acknowledge Putin’s big role in this.” - Berl Lazar, Chief Rabbi of Russia.

"Putin’s pro-Jewish tendencies are part of the reason that anti-Semitic incidents are relatively rare in Russia. In 2013, the Russian Jewish Congress documented only 10 anti-Jewish attacks and acts of vandalism, compared to dozens in France". - Mikhail Chlenov, secretary general of the Euro-Asian Jewish Congress.

“Putin has facilitated the opening of synagogues and Jewish community centers across Russia, at the Jewish community’s request. This has had a profound effect on Jewish life, especially outside Moscow,” Gorin said. “He instituted annual meetings with Jewish community leaders and attends community events. His friendship with the Jewish community has given it much prestige and set the tone for local leaders.” - Gorin, a Chabad rabbi and chairman of Moscow’s Jewish Museum and Tolerance Center

Zvi Gitelman, a professor of Judaic studies at the University of Michigan who studies the relationship between ethnicity and politics in the former Soviet Union, said “Chabad, with the help of Putin, is now the dominant religious expression of Judaism in a mostly nonreligious population,” Gitelman said.

"Putin is philosemitic and has a warm feeling for Israel, though he is a pragmatist. There are quite a few Jews among his close associates and personal friends." - Yevgeny Satanovsky, member and ex-president of Russian Jewish Congress.

"Medvedev will be wonderful for the Jews, just as Putin was" - Lev Leviev, billionaire tycoon in Israel, Jewish activist and big time Zionist.

"Friendship never hurt anyone. But I have great respect for this person [Putin] and I consider that this is a person sent to our country from God." - Arkadiy Rottenberg, Jewish-Russian multi-billionaire oligarch, personal friend of Putin and his former judo training partner. His nephew now plays for an Israeli team.

"Arkady Rotenberg proves time and time again that if you know the right people the sky is indeed the limit." - Jewish Business News.

"Putin’s pro-Jewish tendencies are part of the reason that anti-Semitic incidents are relatively rare in Russia. In 2013, the Russian Jewish Congress documented only 10 anti-Jewish attacks and acts of vandalism, compared to dozens in France.""Putin is not only not anti-Semitic, he’s philo-Semitic". - Mikhail Chlenov, one of Vice Presidents of World Jewish Congress and secretary general of the Euro-Asian Jewish Congress.

"The status of Jews in Russia, is often a barometer of how Russia rulership treats its society, Putin has been better for Russian Jews than any in Russian history, and if you want evidence of that, just ask Israel." - Stephen Cohen, professor at Princeton and New York University, CBS News consultant as well as a member of the [American] Council on Foreign Relations.

"Few would dispute that Putin has been friendly to Jewish institutional life in Russia", "Putin is good for Jews" (non-verbatim, but generally implied). - Cnaan Liphshiz and Talia Lavin, Jewish Telegraphic Agency, "Putin’s Jewish embrace: Is it love or politics". 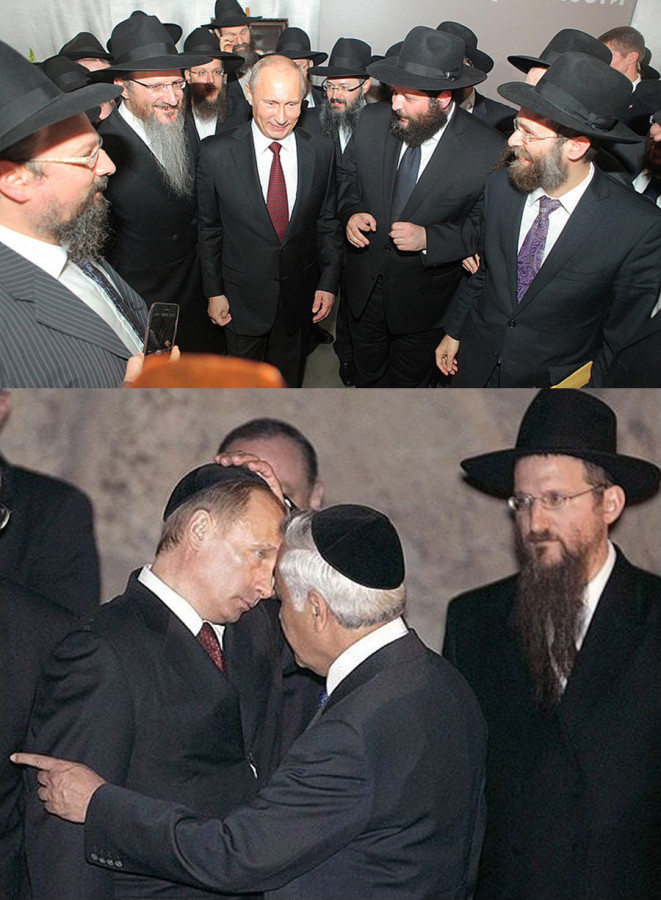 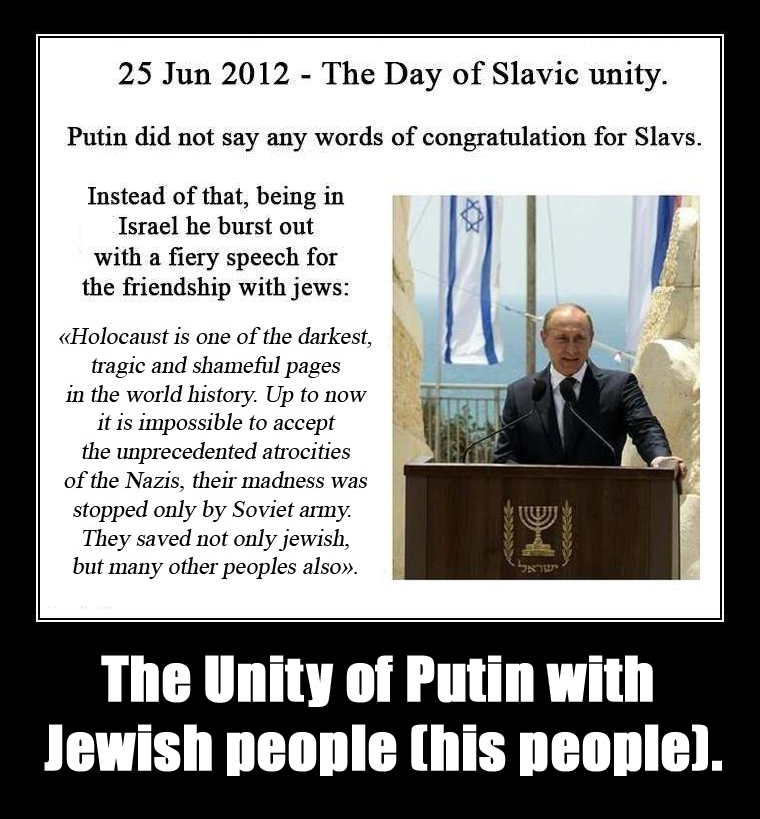