Russian forces have fought two brutal wars against insurgents in Chechnya but the region has since been subdued and awarded a  very high level of autonomy under islamist Kadyrov's control.Since 2001, to keep the peace, the Russian government has flooded tiny Chechnya (1 million residents) with cash, including at least fourteen billion dollars for postwar reconstruction. Today, more than eighty-five per cent of Chechnya’s budget comes from Moscow.

The hardline muslim leader Ramzan Kadyrov appointed by President Vladimir Putin to maintain order in the turbulent Chechen region has created his own caliphate that may one day unleash an Islamic State-style jihad against Russia. In 2004 President of Russia Vladimir Putin conferred Russia's highest award, the Hero of the Russian Federation, on Ramzan Kadyrov. In 2009 former Chechen terrorist was also promoted to the rank of Major General of Russian police. 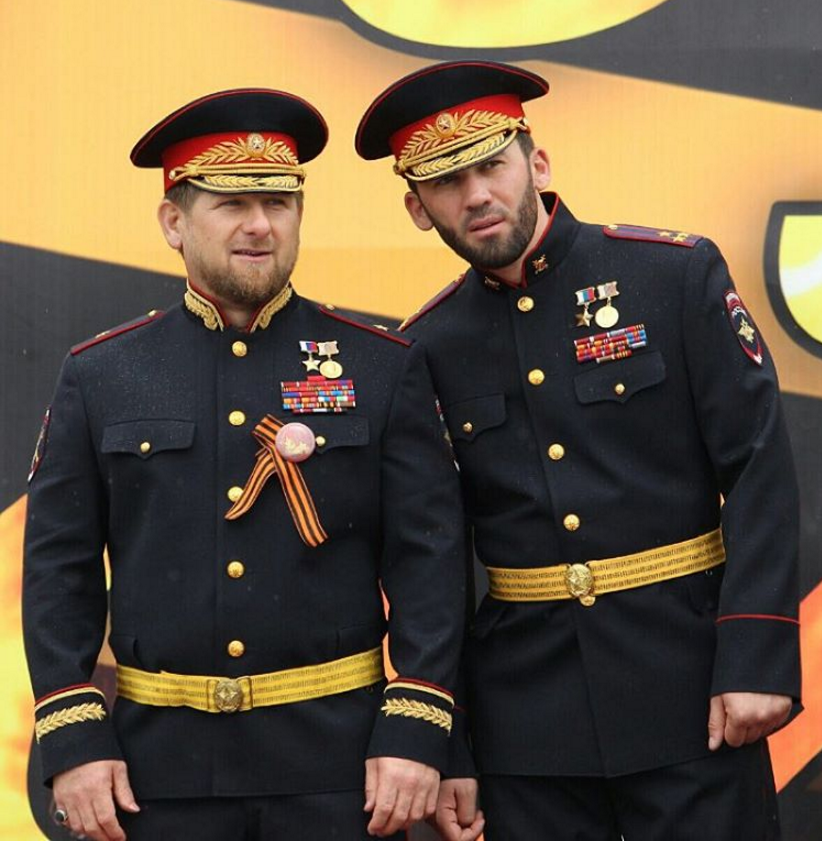 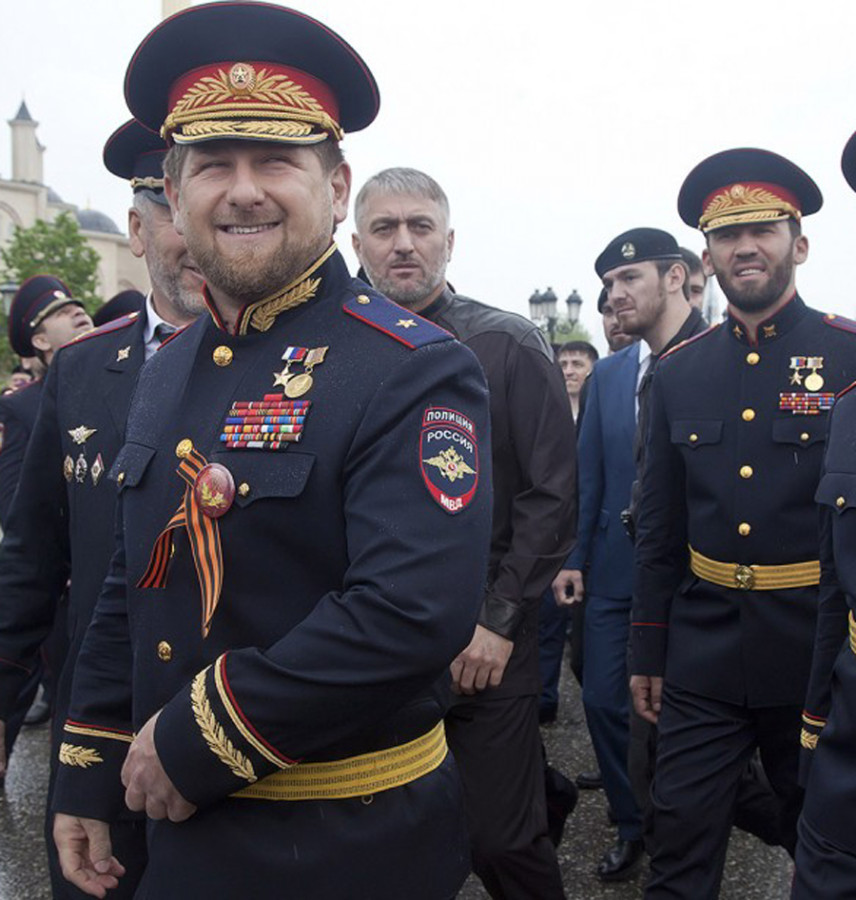 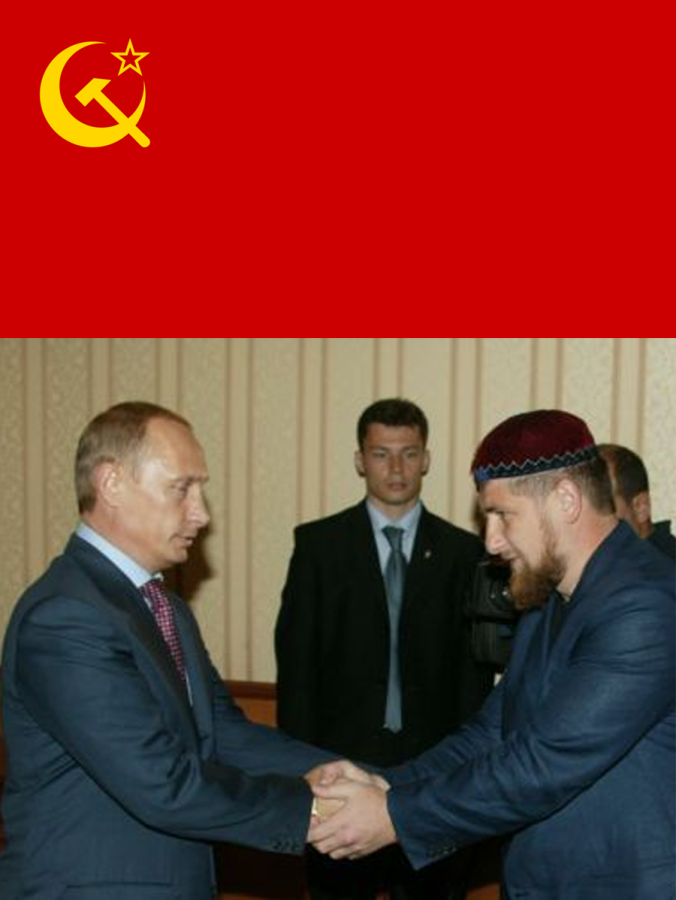 He is the son of former Chechen President Akhmad Kadyrov, who was assassinated in May 2004.Ramzan Kadyrov was a separatist of Chechnya, he had supported the call for jihad against the Russians during the First Chechen War, only to switch sides and declare allegiance to Moscow in the Second. He also admitted personal involvement in executions of local Russian people during First Chechen War. In February 2007, Kadyrov replaced Alu Alkhanov as President, shortly after he had turned 30, which is the minimum age for the post. He was engaged in violent power struggles with Chechen government warlords Sulim Yamadayev and Said-Magomed Kakiev for overall military authority, and with Alu Alkhanov for political authority.

After he became president, Kadyrov immediately proceeded to implement elements of Sharia law, such as declaring a ban on gambling and alcohol production. In August 2005, Ramzan declared that "Europe's largest mosque" would be built in place of the demolished ruins of Grozny's shattered downtown. In February 2006, responding to the publication of the Mohammed cartoons, he accused the Danes of "spying" and being "pro-terrorist". He also banned Danish citizens from entering Chechnya, effectively banning activity of the Danish Refugee Council, the largest NGO working in the region. Kadyrov is quoted as saying, "That cartoonist needs to be buried alive."

Ilya Yashin, a prominent figure in the People's Freedom Party or PARNAS, said the Kremlin-backed leader of largely Muslim Chechnya, Ramzan Kadyrov, had flouted Russian laws and amassed military power while his fighters carried out terrorist attacks against opponents in Russia and abroad.

"In the last few years, our own local Islamic state has formed on Russian territory," Yashin wrote in a report titled "A Threat to National Security". He said a separate "Chechen Caliphate" lived by its own traditions and laws while receiving dozens of billions of roubles in subsidies from the Russian national budget. "Not one politician or department is able to guarantee today that the Islamic state created in Chechnya by Kadyrov ... will not over time become a new "Islamic State" ready to declare jihad on Russia," Yashin wrote.

The report is the latest in a series of increasingly hostile confrontations between Russia's opposition and the hardline Chechen leader, a former rebel fighter turned Kremlin loyalist and one of Putin's most vocal bannermen. Islamic State fighters in Syria have threatened attacks in Russia and Moscow fears that Chechen fighters among the militant group's ranks could return to launch assaults on Russian soil.

Last year, on February 27th, Boris Nemtsov—a former deputy prime minister, who had become one of Putin’s best-known opponents - was walking on a bridge near the Kremlin when an assassin approached from behind and shot him.

The arrests came relatively fast: in the first week of March, the F.S.B. detained five suspects. All were ethnic Chechens; two were arrested in Moscow, and three in Ingushetia, a small republic bordering Chechnya. Security forces said that as they moved in to arrest another suspect in Grozny he blew himself up with a grenade.

Attention quickly focussed on the alleged triggerman: a decorated thirty-three-year-old Chechen officer named Zaur Dadaev, a former deputy commander of Sever. The timing of Dadaev’s departure from Sever was curious: his resignation letter was dated December, 2014, but it was processed on February 28th, the day after Nemtsov’s murder. At first, investigators implied that Dadaev and his suspected accomplices were enraged by Nemtsov’s support for the French cartoonists at Charlie Hebdo, but that theory fell apart after it came to light that his killers had begun trailing him in the fall of 2014, months before the attack in Paris. “Dadaev doesn’t really have his own motives; he’s not a bird of very high altitude, as we say,” Vadim Prokhorov, Nemtsov’s lawyer, told me. “It’s clear that he takes orders from someone else.”

Nemtsov’s supporters, including his family, immediately pointed to Kadyrov and his inner circle. Two days after Dadaev’s arrest, Kadyrov took to Instagram in Dadaev’s defense. “I knew Zaur as a genuine patriot of Russia,” he wrote. Dadaev was one of the “most fearless and brave warriors in his regiment . . . genuinely devoted to Russia, ready to give up his life for his motherland.”

In February, Kadyrov released a video of opposition leader Mikhail Kasyanov in the cross-hairs of a sniper's rifle, a move seen by many as a death threat following the murder of Boris Nemtsov, another prominent Russian opposition figure, last year. Yashin said Chechen authorities were obstructing the investigation into Nemtsov's murder, a sign of Kadyrov's growing influence and power.

Over the years, Kaydrov has denied accusations that he ordered the killing of any of his critics.
In recent years, Kadyrov spoke in favour of honour killings and polygamy, virtually banned the sale of alcohol in Chechnya, and enforced a compulsory Muslim dress code on Chechen women. Those who ignored the policy were publicly shamed and physically abused. Rights groups say Kadyrov's paramilitary forces terrorize, abduct, and kill innocent civilians claiming they were Islamic rebels, and almost a dozen of his political enemies and critics, including two women, have been gunned down since his ascension to power in the mid-2000s. In 2009, Kadyrov stated his approval of honor killings, based on the belief that women are the property of their husbands.

Kadyrov has fashioned Chechnya in his own image. The republic is now governed by diktats inspired by Sharia jurisprudence and Kadyrov’s personal interpretation of a traditional Chechen code of behavior. In 2010, after vigilantes drove around Grozny firing paintballs at uncovered women, Kadyrov said that he wanted to “give an award” to the men. He has displayed a contradictory attitude toward honor killings, condemning the practice while placing it within Chechen tradition. “Here, if a woman does not behave properly, her husband, father, and brother are responsible,” he said in a 2008 interview. “According to our tradition, if a woman fools around, her family members kill her. . . . So let women not wear shorts.” Last November, the Kadyrov administration issued an order requiring all Chechen police officers to read three hundred thousand prayers to the Prophet Muhammad in the course of the month.

One of the more sensitive subjects is polygamy, given that it is unequivocally prohibited by Russian law, but Kadyrov and other Chechen officials have repeatedly come out in favor of the practice. In 2011, Kadyrov told a Russian newspaper reporter that he was looking for a second bride, but couldn’t find a woman beautiful enough. “If you have love, then you can take up to four wives,” he explained, citing Sharia law. Last May, a fifty-seven-year-old district police chief took a Chechen teen-ager—she was said to be seventeen—as his second wife. The ceremony became a short-lived sensation in Russian politics, and Kadyrov weighed in, calling it “the marriage of the millennium.”

Russian federal troops are practically invisible in Chechnya, confined to a single base east of Grozny. The uniformed men with automatic rifles in the capital and in smaller towns are Chechen forces, not Russian, and their loyalties lie with Kadyrov, not with Moscow. Between twenty and thirty thousand men are estimated to serve in units under Kadyrov’s unofficial control. As Kadyrov has accrued power, Moscow has come to matter less and less in Chechnya. “Federal law does not work at all,” Svetlana Gannushkina, a human-rights activist who often works on cases in Chechnya, told me. “But, at the same time, there is no homegrown Chechen system of law. So what is there, then? One thing, just one law, which can be formulated in two words: Ramzan’s order.”

Fighters identifying themselves as kadyrovtsy popped up in eastern Ukraine throughout 2014, where they took part in decisive battles in support of pro-Russian rebels. A former officer of Sever (“North”), a Chechen special-forces unit under Kadyrov’s informal authority, told me that he once recognized another retired member of the unit in a YouTube clip filmed in Donetsk, the capital of rebel-held eastern Ukraine. Onscreen, a Chechen gunman tells the camera that he has come to “defend the interests of the Russian Federation.” The former officer told me that when he saw the video he exclaimed, “Oh, he’s one of ours!”

In December, 2014, Kadyrov summoned thousands of armed men from Chechnya’s various security forces together in Grozny’s soccer stadium. He delivered a rousing speech. “We say to the entire world that we are combat infantry of Vladimir Putin,” he said. Russia may have its regular military, but “there are tasks that can be solved only by volunteers, and we’ll solve them.” The rally both proved Kadyrov’s unique loyalty and reminded Putin of Kadyrov’s strength: if the Kremlin were to reconsider its bargain with Kadyrov, tens of thousands of armed men might have something to say about it. 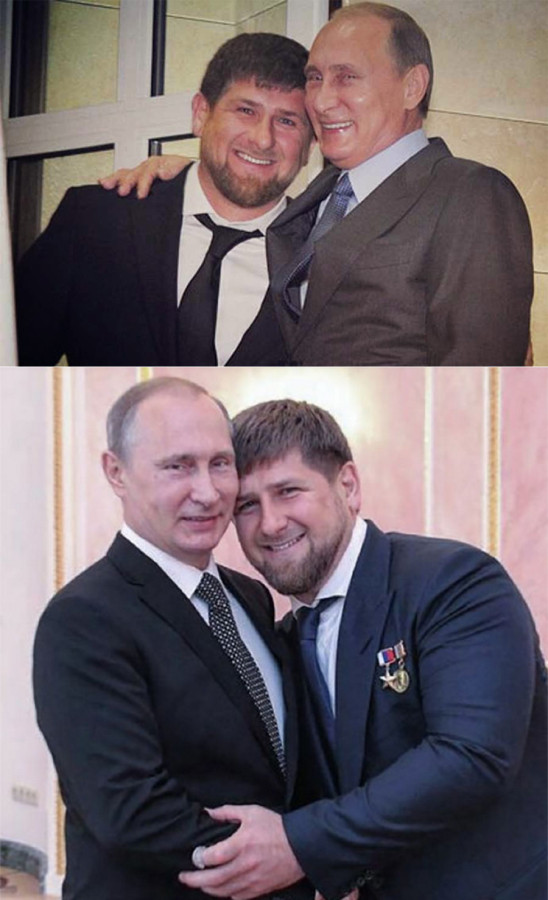