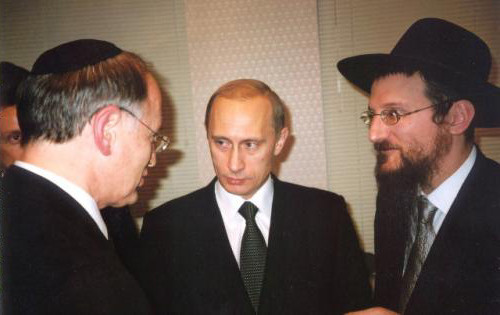 Rabbi Berel Lazar, chief Lubavitch emissary to the region, who was recently elected as the head rabbi by delegates to the newly-formed Federation of Jewish Communities of Russia, accompanied Federation officials Lev Leviev, Michael Gluz and Mark Grubarg to present the prime minister with a silver Menorah. Rabbi Lazar described the Menorah as a symbol of religious freedom. Speaking about the miracle of Chanukah, the rabbi and his colleagues described the resurgence of Jewish life in Russia since the fall of communism as a modern miracle.

Mr. Putin said he was familiar with both the menorah and the Chanukah holiday, because as a child his family shared their communal apartment with a Jewish family. He fondly recalled the pleasant demeanor of the various family members, as well as their attempts to preserve their traditions despite Communist reprisals for practicing religion. The Prime Minister recalled that he often saw the father of the house poring over large Talmudic tomes.

Meeting attendees report that Prime Minister Putin demonstrated a keen awareness of efforts to rekindle Jewish practice in Russia -- along with an acute knowledge of both positive conditions in the country that have encouraged this resurgence as well as anti-semitic incidents that thwart Jewish development.

The Prime Minister also hailed the 30 schools that were opened throughout the country within the last decade.

Prime Minister Putin recalled that as an official in St. Petersburg in 1991, it was he who signed the official documents giving permission for the first opening of a Jewish school in Russia in more than 70 years. Another official was technically to have signed the papers, but, as a Jew himself, he declined, stating that he did not wish people to think he was using his position to assist Jews. Mr. Putin said he willingly undertook the task and considered it to be a high point in his career.

Focusing on the Federation, Mr. Putin described its founding as a positive development to bring diverse groups within the Jewish community together to work toward common goals. He expressed his hope that the new Federation would help foster a climate of communal strength that will make Russia a country where Jews will live comfortably.