Holocaustism is a religion. It is a cult-like belief system in a concept that has widespread and long-term support enforced by powerful people with a vested interest. It is empowered through ignorance and often fear of being called an anti-Semite, Nazi sympathiser and being labelled a Holocaust Denier.

For years, zionist have told people around the world that six million of them were systematically murdered in German "Concentration Camps" during World War II. Anyone disputing this claim has been viciously smeared as a hateful anti-Semite. Countries around the world have even jailed people for disputing the claim that 6 Million were killed.

The ICRC (Red Cross) successfully applied the 1929 Geneva military convention in order to gain access to civilian internees held in Central and Western Europe by the Germany authorities. There is one survey of the Jewish question in Europe during World War Two and the conditions of Germany's concentration camps which is almost unique in its honesty and objectivity, the three-volume Report of the International Committee of the Red Cross on its Activities during the Second World War, Geneva, 1948.

In dealing with this comprehensive, three-volume Report, it is important to stress that the delegates of the International Red Cross found no evidence whatever at the camps in Axis occupied Europe of a deliberate policy to exterminate the Jews. In all its 1,600 pages the Report does not even mention such a thing as a gas chamber. It admits that Jews, like many other wartime nationalities, suffered rigours and privations, but its complete silence on the subject of planned extermination is ample refutation of the Six Million legend. Like the Vatican representatives with whom they worked, the Red Cross found itself unable to indulge in the irresponsible charges of genocide which had become the order of the day. So far as the genuine mortality rate is concerned, the Report points out that most of the Jewish doctors from the camps were being used to combat typhus on the eastern front, so that they were unavailable when the typhus epidemics of 1945 broke out in the camps (Vol. I, p. 204 ff) - Incidentally, it is frequently claimed that mass executions were carried out in gas chambers cunningly disguised as shower facilities. Again the Report makes nonsense of this allegation. "Not only the washing places, but installations for baths, showers and laundry were inspected by the delegates. They had often to take action to have fixtures made less primitive, and to get them repaired or enlarged" (Vol. III, p. 594).

The International Tracing Service (ITS) in Bad Arolsen documents the fate of the victims of Nazi persecution. The archival holdings encompass a total of about 30 million documents on concentration camps, Gestapo prisons, ghettos as well as on forced labour and displaced persons. Charles Biedermann (Red Cross Delegate and Director of the International Tracing Service) testified (under oath) in a Canadian court case, that, as of December 31, 1976, the Red Cross had the names of only 357,190 individuals who died (of all causes) in the entire German concentration camp system. The last official document from ITS proves that only 373 468 victims died in all Nazi concentration camps and not all them were Jews. 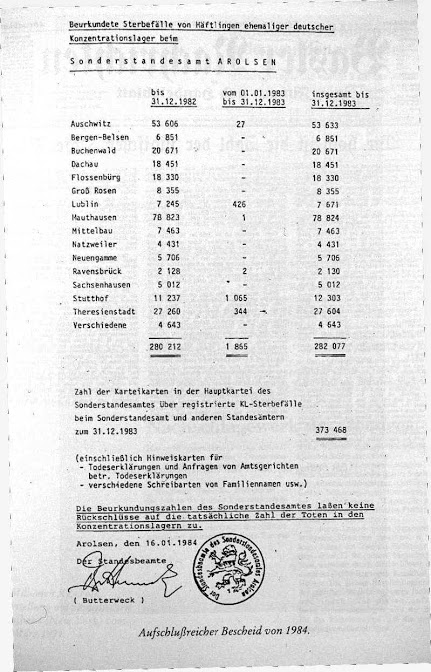 The documents used as evidence at Nuremberg also didn’t prove that six million jews were exterminated. But even more important that these “documents” consisted largely of "photocopies" of "copies". Many of these original documents were written entirely on plain paper without handwritten markings of any kind, by unknown persons. Occasionally, there is an illegible initial or signature of a more or less unknown person certifying the document as a 'true copy'. Sometimes there are German stamps, sometimes not. Many have been 'found' by the Russians, or 'certified authentic' by Soviet War Crimes Commissions. No one ever made an expertise about authenticity of such “documents”. Thus, such “evidence” can’t prove anything. Instead, of seeking credible evidence about extermination of people, judges at Nuremberg have the 'human soap', which has never been tested, and the 'original human soap recipe' (Document USSR-196), which is a forgery; but apparently no original wartime German documents. Nuremberg trial was a political process, where nobody cared about evidence.

Since the outbreak of Holocaustism there has a been much discussion about the subject, many claimed to have seen the gas chambers, many have talked about them and there are some claimed remnants of them however not one piece of credible evidence, not one, exists.﻿ 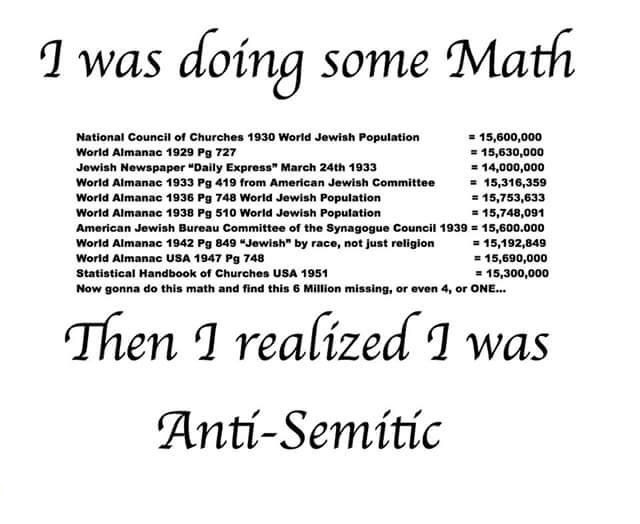